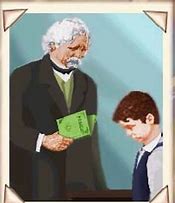 英文小说,最后一课英文版
The Story of a Little Alsatian

I WAS very late for school that morning, and I was terribly afraid of being scolded, especially as Monsieur Hamel had told us that he should examine us on participles, and I did not know the first thing about them. For a moment I thought of staying away from school and wandering about the fields. It was such a warm, lovely day. I could hear the blackbirds whistling on the edge of the wood, and in the Rippert field, behind the sawmill, the Prussians going through their drill. All that was much more tempting to me than the rules concerning participles; but I had the strength to resist, and I ran as fast as I could to school.

As I passed the mayor’s office, I saw that there were people gathered about the little board on which notices were posted. For two years all our bad news had come from that board—battles lost, conscriptions, orders from headquarters; and I thought without stopping:

Then, as I ran across the square, Wachter the blacksmith, who stood there with his apprentice, reading the placard, called out to me:

“Don’t hurry so, my boy; you’ll get to your school soon enough!”

I thought that he was making fun of me, and I ran into Monsieur Hamel’s little yard all out of breath.

Usually, at the beginning of school, there was a great uproar which could be heard in the street, desks opening and closing, lessons repeated aloud in unison, with our ears stuffed in order to learn quicker, and the teacher’s stout ruler beating on the desk:

I counted on all this noise to reach my bench unnoticed; but as it happened, that day everything was quiet, like a Sunday morning. Through the open window I saw my comrades already in their places, and Monsieur Hamel walking back and forth with the terrible iron ruler under his arm. I had to open the door and enter, in the midst of that perfect silence. You can imagine whether I blushed and whether I was afraid!

But no! Monsieur Hamel looked at me with no sign of anger and said very gently:

“Go at once to your seat, my little Frantz; we were going to begin without you.”

I stepped over the bench and sat down at once at my desk. Not until then, when I had partly recovered from my fright, did I notice that our teacher had on his handsome blue coat, his plaited ruff, and the black silk embroidered breeches, which he wore only on days of inspection or of distribution of prizes. Moreover, there was something extraordinary, something solemn about the whole class. But what surprised me most was to see at the back of the room, on the benches which were usually empty, some people from the village sitting, as silent as we were: old Hauser with his three-cornered hat, the ex-mayor, the ex-postman, and others besides. They all seemed depressed; and Hauser had brought an old spelling-book with gnawed edges, which he held wide-open on his knee, with his great spectacles askew.

While I was wondering at all this, Monsieur Hamel had mounted His platform, and in the same gentle and serious voice with which he had welcomed me, he said to us:

” My children, this is the last time that I shall teach you. Orders have come from Berlin to teach nothing but German in the schools of Alsace and Lorraine. The new teacher arrives to-morrow. This is the last class in French, so I beg you to be very attentive.”

Those few words overwhelmed me. Ah! the villains! that was what they had posted at the mayor’s office.

My last class in French!

And I barely knew how to write! So I should never learn! I must stop short where I was! How angry I was with myself because of the time I had wasted, the lessons I had missed, running about after nests, or sliding on the Saar! My books, which only a moment before I thought so tiresome, so heavy to carry — my grammar, my sacred history — seemed to me now like old friends, from whom I should be terribly grieved to part. And it was the same about Monsieur Hamel. The thought that he was going away, that I should never see him again, made me forget the punishments, the blows with the ruler.

Poor man! It was in honour of that last lesson that he had put on his fine Sunday clothes; and I understood now why those old fellows from the village were sitting at the end of the room. It seemed to mean that they regretted not having come oftener to the school. It was also a way of thanking our teacher for his forty years of faithful service, and of paying their respects to the fatherland which was vanishing.

I was at that point in my reflections, when I heard my name called. It was my turn to recite. What would I not have given to be able to say from beginning to end that famous rule about participles, in a loud, distinct voice, without a slip! But I got mixed up at the first words, and I stood there swaying against my bench, with a full heart, afraid to raise my head. I heard Monsieur Hamel speaking to me:

” I will not scold you, my little Frantz; you must be punished enough; that is the way it goes; every day we say to ourselves: ‘Pshaw! I have time enough. I will learn to-morrow.’ And then you see what happens. Ah! it has been the great misfortune of our Alsace always to postpone its lessons until to-morrow. Now those people are entitled to say to us: ‘ What! you claim to be French, and you can neither speak nor write your language!’

In all this, my poor Frantz, you are not the guiltiest one. We all have our fair share of reproaches to address to ourselves.

“Your parents have not been careful enough to see that you were educated. They preferred to send you to work in the fields or in the factories, in order to have a few more sous. And have I nothing to reproach myself for ? Have I not often made you water my garden instead of studying? And when I wanted to go fishing for trout, have I ever hesitated to dismiss you ? ”

Then, passing from one thing to another, Monsieur Hamel began to talk to us about the French language, saying that it was the most beautiful language in the world, the most clear, the most substantial; that we must always retain it among ourselves, and never forget it, because when a people falls into servitude, “so long as it clings to its language, it is as if it held the key to its prison.” [“S’il tient sa langue, il tient la cle qui de ses chaines le delivre.” — Mistral]. Then he took the grammar and read us our lesson. I was amazed to see how readily I understood. Everything that he said seemed so easy to me, so easy. I believed, too, that I had never listened so closely, and that he, for his part, had never been so patient with his explanations. One would have said that, before going away, the poor man desired to give us all his knowledge, to force it all into our heads at a single blow.

When the lesson was at an end, we passed to writing. For that day Monsieur Hamel had prepared some entirely new examples, on which was written in a fine, round hand: “France, Alsace, France, Alsace.” They were like little flags, waving all about the class, hanging from the rods of our desks. You should have seen how hard we all worked and how silent it was! Nothing could be heard save the grinding of the pens over the paper. At one time some cockchafers flew in; but no one paid any attention to them, not even the little fellows, who were struggling with their straight lines, with a will and conscientious application, as if even the lines were French. On the roof of the schoolhouse, pigeons cooed in low tones, and I said to myself as I listened to them:

“I wonder if they are going to compel them to sing in German too! ”

From time to time, when I raised my eyes from my paper, I saw Monsieur Hamel sitting motionless in his chair and staring at the objects about him as if he wished to carry away in his glance the whole of his little schoolhouse. Think of it! For forty years he had been there in the same place, with his yard in front of him and his class just as it was! But the benches and desks were polished and rubbed by use; the walnuts in the yard had grown, and the hop-vine which he himself had planted now festooned the windows even to the roof. What a heartrending thing it must have been for that poor man to leave all those things, and to hear his sister walking back and forth in the room overhead, packing their trunks! For they were to go away the next day — to leave the province forever.

However, he had the courage to keep the class to the end. After the writing, we had the lesson in history; then the little ones sang all together the ba, be, bi, bo, bu. Yonder, at the back of the room, old Hauser had put on his spectacles, and, holding his spelling-book in both hands, he spelled out the letters with them. I could see that he too was applying himself. His voice shook with emotion, and it was so funny to hear him, that we all longed to laugh and to cry. Ah! I shall remember that last class.

Suddenly the church clock struck twelve, then the Angelus rang. At the same moment, the bugles of the Prussians returning from drill blared under our windows. Monsieur Hamel rose, pale as death, from his chair. Never had he seemed to me so tall.

But something suffocated him. He could not finish the sentence.

Thereupon he turned to the blackboard, took a piece’ of chalk, and, bearing on with all his might, he wrote in the largest letters he could:

Then he stood there, with his head resting against the wall, and without speaking, he motioned to us with his hand: