外语自学网 英语阅读 2019-10-28 浏览
英文寓言故事The Lion's Share狮子的那一份儿
一只狮子和其它一些野兽一起猎取食物,后来终于捕到了一只鹿。在商量如何分食物的时候,狮子提出,它要得到它的那一份儿,也就是一整只鹿......
One day, a lion, a fox, a jackal, and a wolf went hunting together. All day long they tried hard, but could not find anything satisfactory. It was only in the late afternoon that they could catch a deer. The four beasts surrounded the poor animal and killed it as fast as they could. Then they decided to share their food.

The lion was the lord of the jungle and superior to all in strength. Hence, the other creatures agreed when he proposed to share the food for all.

Placing one of its paws upon the dead animal, the lion said,

"You see, as a member of the hunting party, it is my right to receive one of these portions." 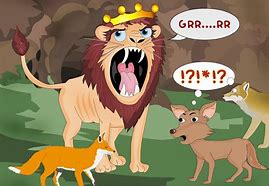 The others nodded in agreement.

"But then, I am also the King of Beasts. So I must receive a little bit more". he declared.

The others looked uneasily at each other.

"And besides, I was leading the hunt. So I deserve a little more extra". he proclaimed.

The others mumbled something, but it could not be heard.

"As for the fourth share, if you wish to argue with me about its ownership, let's begin, and we will see who will get it."

"Humph," the others grumbled. They walked away with their heads down. They knew it was pointless to argue about their shares.